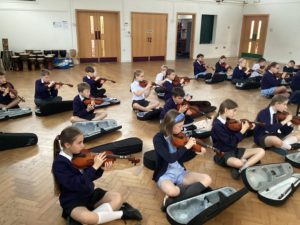 Year 5 were very excited to start their violin lessons last week (look out for future blogs on how we are getting on with learning this wonderful instrument).

As violins feature heavily in many different types of folk music, we focused our music appreciation on this genre last week.  We listened to Vaughan Williams’ English Folk Suite, which is made up of 3 sections.  We thought about what instruments we could hear and the effect the music had on us.

We thought this sounded a bit medieval and royal.  It sounds like a march and we could hear the violin and trumpet. It made us feel joyful and excited, uplifted and like we want to dance.

This part was slower and sounded depressing.  It was quite gentle, not too loud.  We think someone might have died.

This part sounded quite royal with trumpets.  There was a flute solo. It felt quite celebratory like it might be played at a wedding.

Then we listened to another folk song called John Barleycorn and considered how it was similar and different from the folk songs in Vaughan Williams’ suite.

This sounds different from Vaughan Williams’ suite because we can hear guitar and there is singing.  It sounds a bit like country music.  There is also flute in it.  The drama built up with more instruments as the song went on and the pitch got higher.