Year 5 all had their hankies out as they watched the short film “The Piano” at the start of this half term.

The children first discussed what they thought was happening in the film and decided that the old man was reliving memories of his life.  We noted the features that the film maker had used to highlight the emotion – the dark room with a single light, the man’s position and the haunting music.  The children were able to use these effectively later on when they came to write their narrative of the film. We also thought about the man’s different emotions throughout the film and brainstormed lots of synonyms for these emotions and also ways that we could show the reader what he was feeling rather than telling the reader (this would make our writing more engaging). 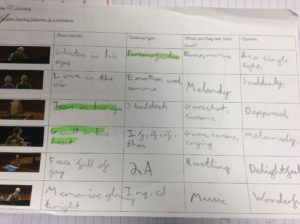 All of this build-up work culminated in a planning session, when we broke the film up into three sections and thought about vocabulary and sentence types that could be included in each section.  This led into three days of writing where the children did themselves proud with some very emotional pieces of writing that really pull on the heart strings.  Watch out for some of the best work coming soon on our you tube channel, performed by the children themselves!